It’s the start of a brand new homeschool year for us, and we are slowly transitioning from easing into school to implementing a full homeschool schedule.

So what does a full homeschool day look like for us?  Well, it doesn’t have any rigid timings that’s for sure.  You see, when I first began homeschooling one of the first things I did was print off a daily timetable, and I furiously began filling up the slots with not just what we needed to get done academically, but also LIFE!  From cooking dinner, to teaching phonics, everything was timed.

At first, I felt great.  Every tick box felt like an achievement.  But slowly those days became less and less, because I wasn’t able to keep up with such a strict regimen.

Because schedules are based on time.  They bring about a ‘strained’ atmosphere.  They can make you feel like you constantly need to be doing something or you’ll end up falling behind.

In a nutshell – schedules can make you, well, sad.

So out went the daily timetable, and in came our routine, bringing back with it my sanity, Alhamdulillah.

See, having a homeschool routine works great, rather than a strict schedule, because it creates order and expectation without the pressure.  My children thrive on routine, Allahuma barik, and they like to know what the day has in store for them.  And as the children get older it helps to create a sense of independence, as they can get stuck into whatever they need to do, and this is especially beneficial when it comes to homeschooling.

So why are block schedules useful compared to timetables we’re all so used to?

They take pressure off you and the kids to get things done within a particular time frame.  Because lessons can sometimes take longer depending on what you covered, how quick the kids grasped the concept and even just delving off into you didn’t have planned but did it anyway (yay for homeschooling!)

When the days starts a little rocky, you can get into the groove a lot quicker.  Rather than thinking its 10 AM and we haven’t started English and its almost time for Arabic, you can instead think, it’s time to get Block one started and then take it from there.  It makes a HUGE difference because it creates that flexibility in your day which is key to a consistent homeschool.  Even if the time has passed, it doesn’t stop you get starting and making a dent in it.

It allows the room for spontaneity.  So, imagine it’s a nice day and you all want to get outside and enjoy the Weather.  You don’t need to think that you can’t because it’s time for English.  You can just choose to get that block done when you’re back.  Because again, you’re not bound by time all the time.

It’s easier to get it all done.  I truly believe this.  There’s something about flexibility in our homeschool that breeds consistency.  Because when you know that it can be done in the morning or on some days the late afternoon, you’ll get it done. It’s harder to feel that way when you feel like you’ve ‘missed Math’ because the mornings over.

Not having timed subjects has allows you to explore further into a subject area when your children’s interests are sparked or wrap up things quickly when you feel concepts have been grasped and there’s no need to just hang in there to reassure yourself that enough was done.  They are also great because as you change up things throughout the year, such as adding in activities, you don’t need to redo your entire timetable all over again.  You can just slot them in and keep everything else the same.

Having said that, timed subjects also have their place.  As much as homeschooling is about flexibility, it’s also important that our children learn about deadlines, time management, and preparing for lessons with a set timing too because this will only help them in the future.  So, slot these timed lessons into your block schedule too.  It’s about keeping things flexible but still encouraging time management.

NOTE: TWO YEARS LATER AND IT WAS TIME FOR A REVAMP.  REVAMPED BLOCK SCHEDULE PLANNER CAN BE DOWNLOADED HERE!

Have a wonderful day!

3 thoughts on “Routine Vs Schedule (+Planner)” 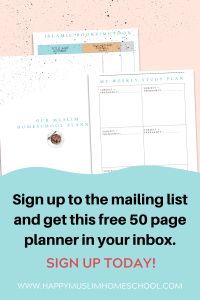 Plus weekly encouragement for your Muslim homeschool.
Sign up below!